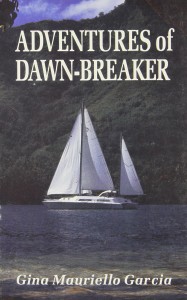 This is Russ and Gina’s adventures of sailing to places where no Baha’is had ever sailed before; of their resounding send off and of the love they met along the way. This is the story of love from friends who donated their flag with background stripes of brown, yellow, white, and red to symbolize the colors of man; the white nine-pointed star representing the unity of humanity; the circle of blue symbolizing the sea, sky and earth and citizenship of the world; and the love of the painter of “Dawn-Breaker” as a reminder of the early martyrs of the Cause who gave their lives to break the night of hate and ignorance of man’s thinking with the love and knowledge of God’s new day. It is the story of the 1950s when they were investigating Baha’i and came home so spiritually stimulated that they lay awake till dawn talking. It is the story of their first day when they rescued a frantic elderly couple drifting out to sea only to be caught in Hurricane Alma that broke the boom, stopped the engine, put out the electrical system and forced them to bale. It is the story of their sheepish return to Hollywood while the boat was repaired; it is the story of their soul searching as to whether the hurricane was a sign not to go or a test of their resolve and commitment. It is the story of the adventures of highly committed people to support fellow Baha’is around the world bring the message of God’s love. It is the story of Russ and Gina’s hopes, disappointments, joys, and difficulties and the decision that changed their lives.

Here’s why to donate!!